Relationship Is the Real Bridge across the Border

I have been participating in and helped lead mission trips to the Tex-Mex border since 1989, more specifically since 1994 with Ministerio de Fe / Faith Ministry. My wife, Janis (better known as Juana in Mexico), helped lead these trips also, until she passed away in September 2000. Our groups from Grace Community Church in Raleigh, NC, have built houses in Reynosa and Miguel Alemán. Each and every concrete block has been laid down over the years while literally working hand in hand with some very special Mexican friends in each of these communities. If I were to list all those names, it would take several pages.

Through the years, Grace’s adult construction team has become a dedicated “core group” of returnees, plus a few new participants with each trip, usually in the early fall. I do find that every trip is unique and different, despite the many times we have crossed the border. Always, however, one thing remains the same; it never fails that we are thrilled with excitement when we reunite with our sisters and brothers in Mexico. I liken it to a family reunion each year.

Unfortunately, in recent times, Mexico has gained the reputation of being too dangerous for mission teams to travel there. Several years ago, Grace Community discontinued sending the youth to neither Miguel Alemán nor Reynosa, while the adult trips have never ceased. As those trips continued, we have had constant care and guidance from Faith Ministry at the very second we cross into Mexico. As a result, our safety has never been an issue.

In May, this sixty-one year old was very privileged in receiving an invitation to help lead a team of college / young adults on a construction trip to Reynosa. Out of a desire for our young folks to again experience mission ministry across the border, this trip was set into motion. Never did our safety become an issue or concern during the entire week. Faith Ministry took very good care of us.

Now, I would like to reveal the true reason(s) I am writing this. I hope and pray the readers will feel and taste a little of our week in that hot, dusty colonia. For twelve young adults, this was either a first time in Mexico or a “re-introduction” (several in the group had been there as youth). For this “sixty something,” it was a refreshing renewal I really wasn’t anticipating. It was like the excitement of my first trip in 1989 all over again. To my amazement, within minutes of stepping out of the van, I saw smiles back and forth, conversations and friendships forming. I was quickly reminded how absolutely warm, accepting and genuine these Mexican friends are when they embraced those in our group who were total strangers to them. Oh yes, we went right to work that Monday morning, moving concrete blocks, pouring a floor, and building walls. After all, we had a house to build for José and Miriam and their two precious children. And yes, we were building it next to the trash dump. The patient helping hands from our “new” friends, their smiles and their hugs made the smells of the dump disappear and the temperature more tolerable and took away any language barriers (“love in any language” is so true & no need for interpretation). Soon I witnessed happenings like children at play with our group, babies being held, our Mexican friends bringing us drinks and snacks, and times of fellowship, all while concrete was being poured and blocks laid. 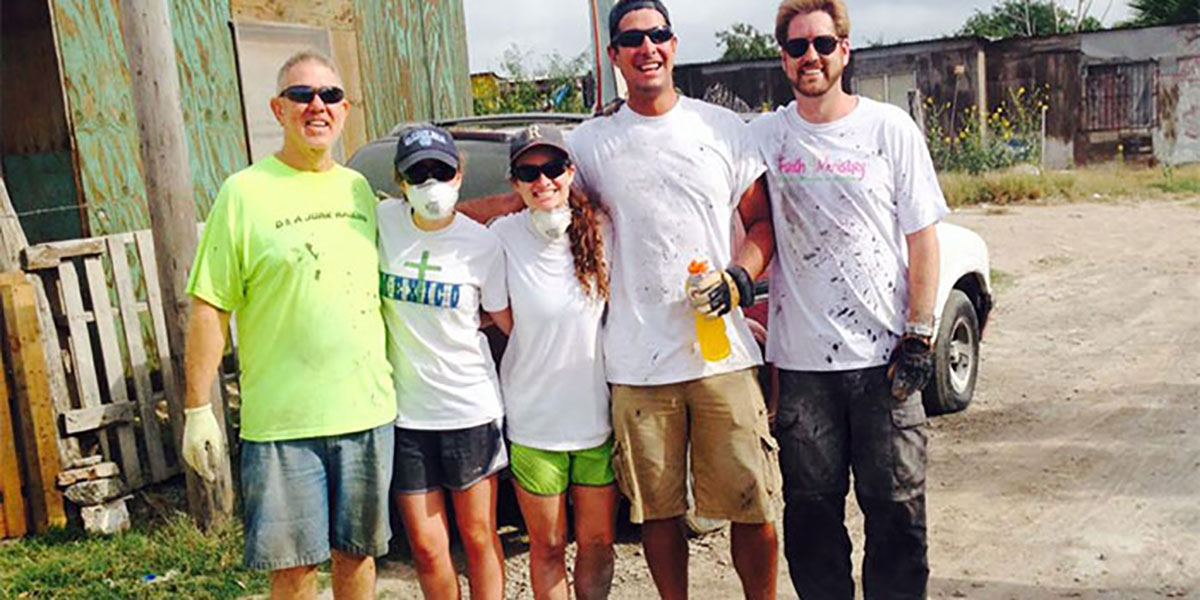 Each evening, our team would gather on the flat rooftop of the church where we were staying. Under the stars was such a great place for devotions and a sharing time about what we were experiencing, not to mention some very competitive rounds of Catch Phrase (a fantastic group participation game). On Wednesday night, without being prompted, one of the team members absolutely nailed it when she said: “The point of this trip is about relationships, not necessarily building a house. The money could simply be sent for the materials, and the people in this community could build their houses . . . our help truly is not needed. Instead, what they really desire are relationships and friendships with us!” Did that bring tears to my eyes? You better believe it did. I was absolutely beyond myself, seeing the way the hearts of these young adults were touched. They witnessed and learned what true hands-on mission / outreach is all about. In that short week, we took an exciting journey inward to the depths of our souls and then a journey outward, as many Mexican souls touched us.

As the week came to an end, we dedicated the house for José and Miriam and their children. We placed our signatures on the wet concrete plaque formed on the front wall of the house, using rusty nails to pen our names. At the same time, we asked God to bestow many blessings of hope upon this family and our community of friends in the colonia. The last night we had a cook out at the church with about sixty or seventy of our “closest” Mexican friends. It was a true fiesta filled with plenty of music, dancing, and laughter.

Personally, the week was an absolute revival for me. If ever I have the thought of not returning to Mexico each year, then I will simply remind myself of that week in May. On the last leg of our trip, from Dallas to Raleigh, we were all sitting in a group toward the rear of the plane. I was actually separated from the group by a couple of rows. We were all wearing matching Grace Community Church t-shirts. At the moment the flight attendant handed me my drink, she whispered: “You have an amazing group of young adults with you.” Through the lump in my throat, I managed to say “thank you,” really meaning: “Thank you God for these special young folks and the unbelievable week I have experienced with them.” They each have a special place in my heart, as does this week in Reynosa.

As I close this writing, I can’t help but offer one more thought to the reader: Any time you feel God’s urging and calling to be a part of missions and ministry and to reach out to others, you need to “jump on it like a hen on a June bug!” Your life will be forever changed. I promise!!!!