One week ago, I stood on a rocky dirt of a soccer field in the outskirts of Reynosa, México. I decided to dust off my high school soccer skills on a team of the four gringos taking a swing at playful competition with our Mexican friends and foremen. These guys were tough – and though they had been working to pour a concrete roof all morning – they seemed to come alive with the challenge. One member of the team, Ángel, was a formidable giant. While soft on the interior, his tall stature and hefty body made me tremble whenever the ball reached him (I had seen him lay bricks and knew that our strengths were not comparable). It was a nearly tie game and we were taking ourselves rather seriously – until Ángel took us off-guard.

After one of my teammates took a (finally) well-aimed shot on goal, the mighty, big-boned Ángel got off his feet and dove into the dirt. Whole body, thrown onto the ground in an instant! He was not someone who I thought to be nimble, but in the way that he dove, I was clearly mistaken. It was nothing short of miraculous. When he realized that he had made the save, with all his muscle and bone protecting that soccer ball, a smile bigger than the goal itself lit his face. He then jumped up, light as the dirt he’d brush off his jeans, like a ballerina that just discovered he could defy gravity. 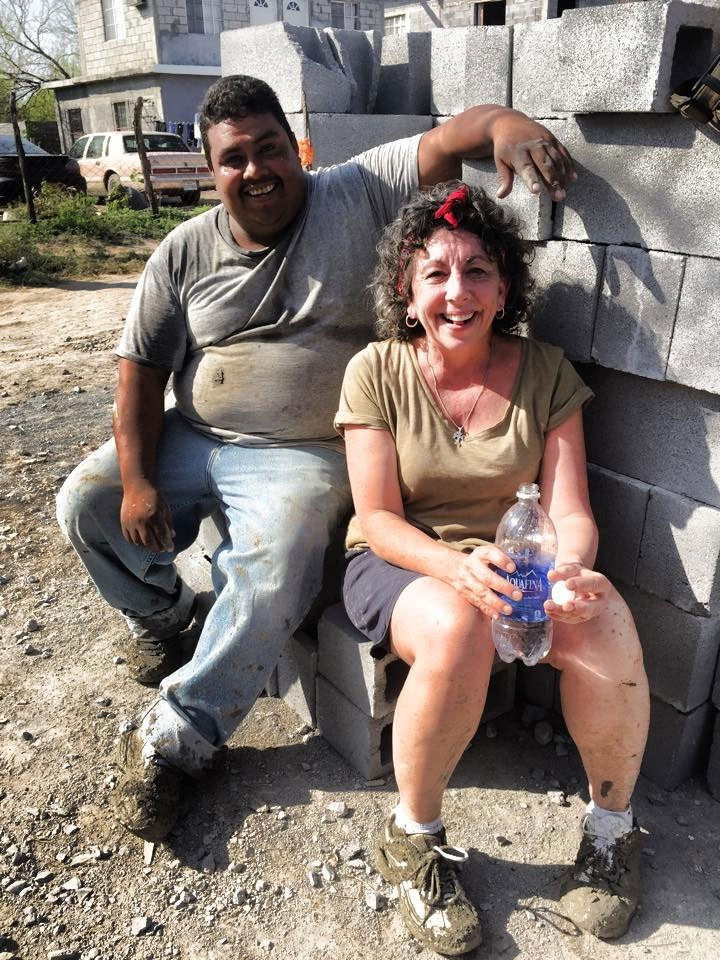 Ángel and Carla on a work break – both leaders that carried our team through the week with their joy and friendship. Can you imagine him diving after a soccer ball?

I can’t remember the last time I laughed so vigorously than when Ángel played goalkeeper that afternoon – not just once, but over and over again did he give his whole self to the game, along with his teammates Colleen, Martin, and “Chuky” (spelling is mine). There was a lightness to that match that felt like time disappeared, as if Ángel had grown wings and brought us to laughter with him.

The week was a mixture of the hilarious, the unforeseeable and unexpected formation of a community, and the downright hard task of coming to terms with an unjust reality. For most of the week, I was taught by my Covenant teammates to re-focus on the power in forming relationships. While learning to mix and shovel concrete, I got to know my inability to lift heavy objects – and also came to know the foremen like Ángel, as well as the family with whom we built a simple, cinderblock addition. As a family of seven, their two-room home was expanding just as their circle of friends was widening. I loved every minute of coming to know three sisters, Gloria (15), Lucia (17), and Beatriz (24), as they shared their photos and lives’ testimonies with us. 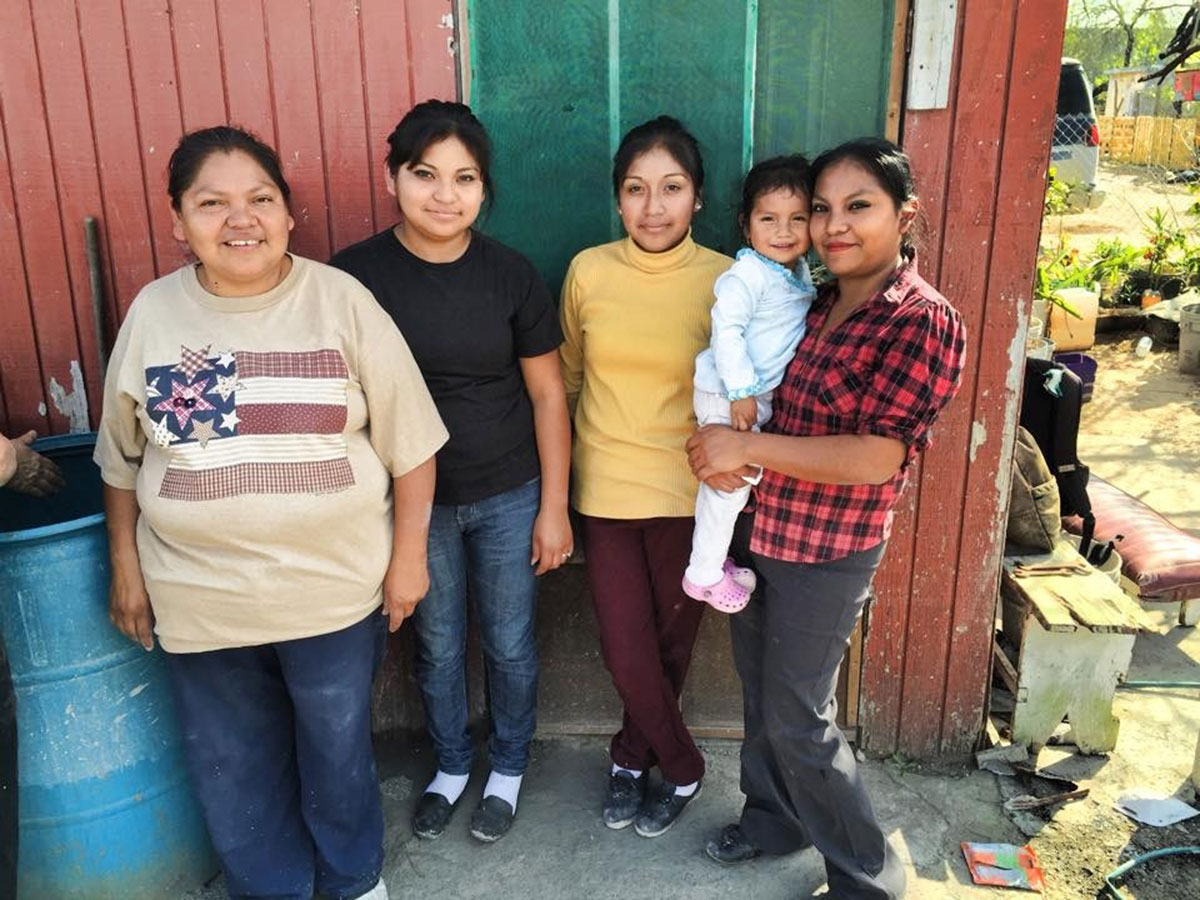 The family gathered before their existing home – right to left: Beatriz and Viviana, Gloria, Lucia, and Remedios

The more that I came to know these young women, the more that I felt the barriers between us slowly lifted. They welcomed me in with no pretense or presuppositions. And though we only shared a few conversations, Beatriz shared with me the heart-wrenching story of her past year’s trials. As a mother of two, she has recently left an abusive marriage and lost custody of her children due to lack of a suitable living environment. One of her daughters, Katherin (age 6), was taken by her father to live across the border in Texas. Beatriz cannot cross the border with two-year-old Vivian, and does not know when she will see Katherin again. As she told me about her beloved daughter, she gave me a printed photo of Katherin – a peacefully smiling child with a red-ribbon wrapped present in the lap of Santa Claus. Her eyes look directly at the camera. I did not know how to accept such a gift except to know that I would carry it with me, along with the burden that Beatriz faces in being away from her each and every day.

The young women also shared in the spirit of celebration – we poured over photos of Gloria’s quinceañera, her fifteenth birthday party, that was gracefully funded by their church members. Her sisters’ faces each lit with pride when remarking upon the event. And we laughed at my bad Spanish accents and when Vivian made precious faces, the way that Carla screamed of surprise when Stephen put an iguana on her shoulder (it was quite the sight). We spent time to not only accomplish the needed tasks of house-building but to celebrate the fact of our coming together, and the reality of God’s presence in our midst.

Upon returning, I have realized how much our group from Covenant in community with our Mexican brothers and sisters had, in time, become a family. We shared intimate details of our lives as well as the uncomfortable eight-hour stretch of a van ride, the feeling of concrete rubbing your skin ’till it bleeds, the dis-ease that comes with saying goodbye and hugs clinging tight before returning to “normal life.” These moments of lineal connection felt as if we had touched something eternal, something as filled with undeserved love as God’s grace. Father Gregory Boyle described it perfectly when he stated, “If kinship was our goal, we would no longer be promoting justice, we would be celebrating it.”

Yet it is a battle to remember that this kinship demands a justice, especially when returning to the comfort of a world like Davidson, North Carolina. Here, it does not feel evident that 40 million Mexicans live on $1 a day. It does not feel as pressing that hundreds of thousands of men, women, and children each year risk their lives to cross the border in search of income to send home. It is difficult to imagine that a pond behind my home could be filled with toxic waste from American companies’ factories.

It is difficult to imagine that a pond behind my home could be filled with toxic waste from American companies’ factories. It does not feel as pressing that hundreds of thousands of men, women, and children each year risk their lives to cross the border in search of income to send home. My friend Marlene, a fellow Davidson student and all-around incredible human, taught me novels worth about the realities that immigrants (documented and undocumented) face in assimilating to a culture where the “American dream,” once long driven toward, may be nothing but a hollow illusion.

Though my clothes may now be washed and we are thousands of miles apart, the stories of our Mexican brothers and sisters still echo within me as we continue our lives on separate sides of the border. I can still feel the powerful resonance of our friend Joanna’s voice to the depths as she sang “Amazing Grace” to us at sunset. I still remember the joyful feeling of playing with four-year-old Jesus, and I still feel unsettled by the political turmoil in his neighborhood. I still remember the barriers that Lucia and Gloria face in trying to do their homework every night, and the inspiration of their dreams to work in forensic medicine and anthropology. I still remember the sound of the roosters chiming their pre-drawn chaos and the feeling of going to bed with a sore body and a heart wrestling with the many layers of a bordered reality – though it may now be out of sight, the questions this trip raised cannot be left out of mind.

As my professor Karl Plank said this week, to call memory is to re-member: to reform and rejoin toward a cohesive whole, to unite parts that have been broken, separated, or disjoined from one another. In remembrance, we break the barrier between the past and the present, the old and the forthcoming. We remember that our present distances and differences cannot isolate us from our essential unity. The borders cannot break us.

To remember the stories and the faces of those with whom we gathered at table and laid cement is to remember that we belong to one another, and that our stories are now inextricably connected. This kinship – this recognition of our belonging to each other and to God – is what I believe Jesus asks us to do each and every day. Just as the celebration of the Eucharist asks us to remember his sacrifice, we are also asked to remember each other, and that our broken and isolated selves are part of a larger Body. To remember, to cross the borders between us, is the way that this kinship may continue to be kindled so that we may be each the bread for each other. It is the way that Christ himself remains with us as we remember that each of us has a part in His work, and that we share both our burdens and our celebrations as a collective.

I have one last note to mention about remembering. In the past several months, I have been grateful to be remembered by my prayer partner and adopted grandfather, Jim. Jim has been supporting me from day one when I began my work at Moore Place this summer, and especially when I decided to go to Mexico. Since the day we began the Journey to Reynosa, he has been the one to remember each day to pray for our trip and to hold us in the light. Jim has been the constant thread and reminder to me that our spiritual family is a gift from God to keep us going, and to make us laugh when we most need it. And to give us a care package of brownies – just as a reminder of the times we were able to simply be together in communion and look forward to the next occasion.

By sharing the dirt of daily labor and the communion of tortillas at table together, the wings of kinship can lift us in ways we did not imagine to be possible. In places of great injustice, darkness, and violence, the Kingdom becomes visible when those who believe gather together. When we remember the love of Christ that dwells within us, we return to see the goodness in one another. I thank God that there are people like Ángel that defy gravity by diving into the dirt and turn concrete mixing into a communal activity. I thank God for the beauty of Katherin, and pray that she may be reunited with her family. And I thank God that are angels like Jim that come into our lives to watch over us and bring us peace.

I close with a prayer that Jim wrote, that I now share with you, dear reader, wherever you may be:

My prayer for each of you tonight is to know that you are remembered. Even though many miles separate us, our thoughts and our prayers are with you. Peace and love to teach of you.
In Jesus’ name, amen. 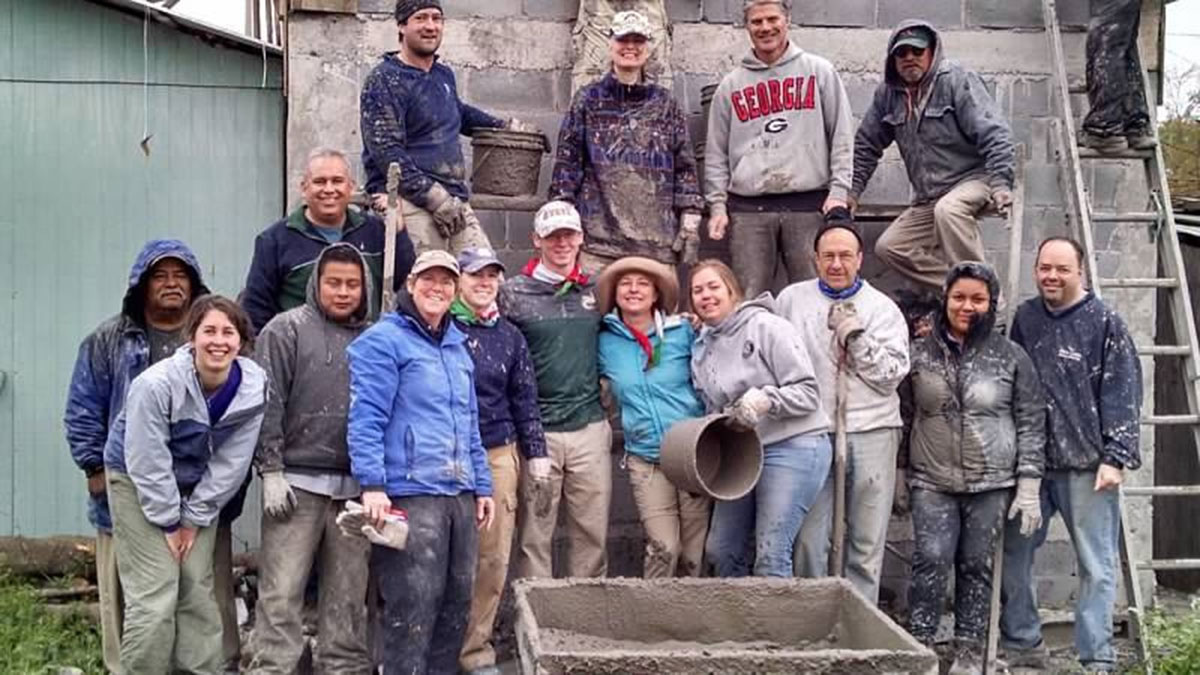 The celebration of our last day of roofing being complete – the whole Covenant team! Dylan and his abundant energy, Jerry’s musical laughter, Andrew’s youthful spirit, Mary’s grounded presence, Scott’s intentionality to get to know others, Darren’s unfailing-to-be-silly sense of humor, LeAnne’s passion and unbounded compassion, Carla’s way of seeing into our hearts, Amy’s song and strength before us, Erin’s desire to share with the girls of our family, Stephen’s desire to serve and patience, Heather’s willingness to listen, Marlene’s humility, Kay’s ear for hearing God speak, and Amanda’s open spirit made for an incredible week.

And we could not have done it without Faith Ministries – especially Omar, David, Ezekiel, Lupe, Ángel and our faithful leader Colleen – to guide us! May God continue to bless their labor to do God’s will of justice in Reynosa, one family at a time. 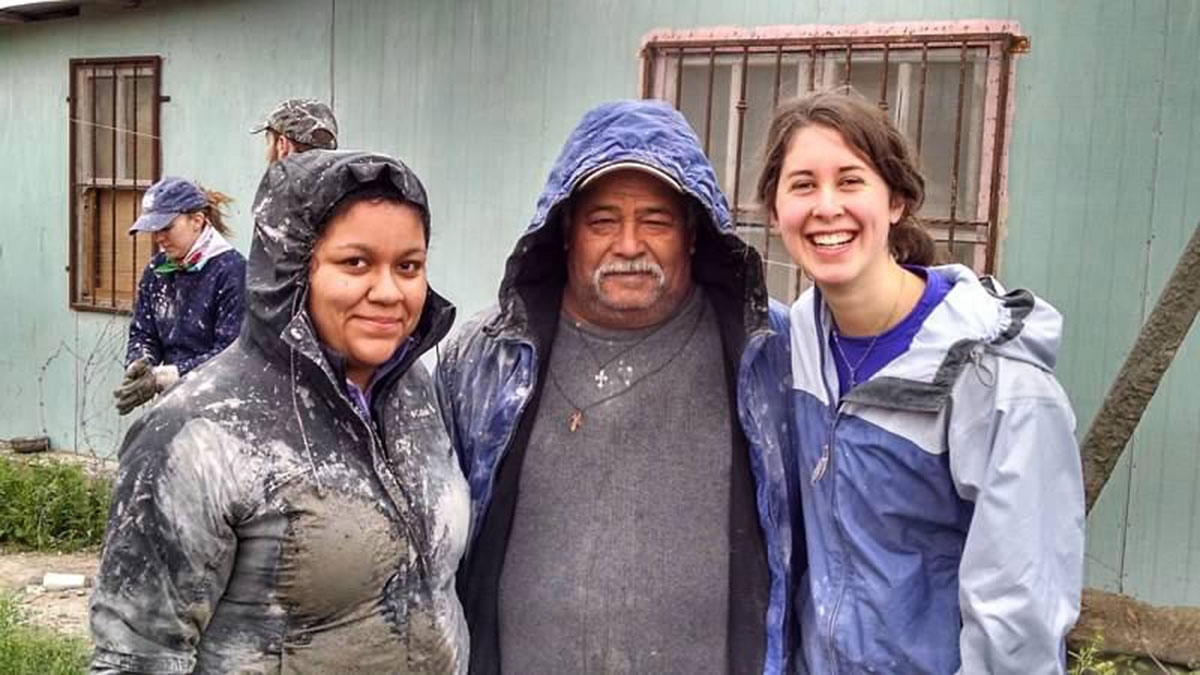 Marlene and Ezekiel, who will remember one another for a long time to come.