As 2011 begins, we’re praying for a good year of construction so that families in need might have a secure home to protect them from the elements. But even in the winter months, Faith Ministry staff and volunteers have been hard at work.

At this writing, the temperature is below freezing in the border region, something the area is not used to. Already, David Rodriguez and Omar Saldaña have distributed blankets in the community.

Just before Christmas, we held five small fiestas in Reynosa and Miguel Alemán – at the Betty Clinic in Reynosa, the churches in Reynosa and Naranjito, and at the church and with refugees in Miguel Alemán. Your support enabled us to provide 1,200 toys for children at Christmas. Many people are without jobs, and for them, buying toys is out of the question.

Employees of the ministry got together for a New Year’s gathering. After a hard year, the staff prayed for supporters and the families of Mexico. 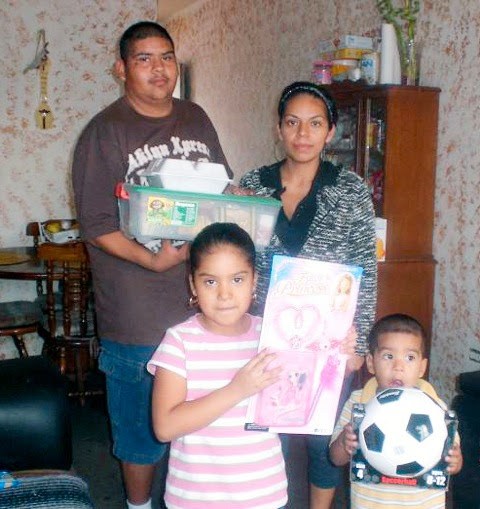 Before the end of the year, violence in the town of Mier caused a crowd of refugees to take shelter at a facility in Miguel Alemán, and Faith Ministry staff began cooking meals for them. For awhile, the ministry provided 250 per day, before the government closed the shelter. At this point, we’re cooking meals each day for 30 people who didn’t want to return to Mier but had no other place to go. The meals are cooked at our complex in Miguel Alemán and delivered door to door. Three families have been “adopted” and are staying at our facilities.

Though troubles in the region hampered our construction efforts in 2010, we ended the year with 23 houses built – 17 in Reynosa and 6 in Miguel Alemán. Many teams who had to cancel their visits sent money so that staff and Mexican volunteers could do the construction. As we begin 2011, some 60 families need houses and have filed applications. Our goal is to build at least 25 to meet the most urgent needs.

All three churches – Reynosa, Naranjito and Miguel Alemán – are growing. Deantin, Pastor Castillo and David are preaching once a month at each church, and the congregations are working to build programs for children and youth. Currently, the congregations number 50 in Reynosa, 60 in Migeul Alemán, and 70 in Naranjito.

You may have noticed from our Facebook page that we’re praying together in the U.S. and Mexico at the same time on the first Friday of each month. That time is noon ET/11 CT. Join us as we seek God’s direction for the ministry and pray for each other.